People will appeal to whatever that they think will aid their argument.

Ironically, science owes much to the Aristotelian methods employed by the Roman Catholic Church to prove religious doctrine and principles, in the western world, at least. And there’s plenty of science to support gender issues, rather than relying on subjective arguments.

The last Protestant TD that I know of was James White of Fine Gael, and Fine Gael generally seemed to be the party that attracted Protestant votes in Donegal, at least up to around 1990.

Elsewhere in Ireland, and more recently, I couldn’t say.

Shane Ross, current Minister for Transport is a CoI member.

My grandfather-in-law (just turned 92) converted to the Jesus Christ Church of Latter-Day Saints (Mormonism) specifically to get away from the green and orange conflict in Northern Ireland.

JW and LDS were not specifically targeted, unless they were also police, UDR, etc. They could, however, get caught up in the violence, just as any civilian could.

They could also be ‘profiled’ in social circumstances. That old joke referenced before – are you a Protestant JW or a Catholic JW – is only the teensiest smidge of a tiddly wee snippet of an exaggeration: you wouldn’t be asked outright, but you would be asked your name, and where you went to school, which amounted to the same thing. A JW with a name like Martin who went to school at St Michael’s Enniskillen? Catholic. Sharon who went to Ballyclare High? Prod – doesn’t matter how many copies of the Watchtower she’s got on her.

Christians acknowledge a number of names for God: Jehovah is probably the most common, coming from Yahweh, a form of the Hebraic JHWH both of which are also used. I AM is also used (Genesis 3:14).

Another name is El (or Il). This, and its cognomen, Elohim, are not often used, for a variety of reasons:

Supposedly, the injunction against taking the Lord’s name in vain (swearing or blaspheming) refers to not using JHWH for any other reason than discussing God, or praying to God. I was told as a child that this is the reason JHWH has no vowels – to make it impossible to pronounce so that you couldn’t use it as a swearword even if you wanted to: however, written Hebrew, like written Arabic, doesn’t need vowels*, so I think that might be an old wives’ tale.

* – they do use dots and diacritics to represent vowels sometimes, but not in all written works.

“If God did not exist, we would have to invent him.”

This koan-like statement sums up much of my take on God. An initial gloss simply assumes that God does exist, but in the unlikely event that he didn’t, we would have to invent him. However, it begs the question, does he exist now because we invented him? So, he doesn’t really exist at all? This theme is explored at a less brain-frying level in Terry Pratchett’s Small Gods.

I’ve had a chequered history with the divine (as I’ll refer to God, gods, goddesses and pantheons from now on. Slap everyone or get out of the fight) and have come out atheist. However, I don’t necessarily think the divine is a bad, or an unnecessary thing. Karen Armstrong (ex-nun, atheist theologian – excellent, readable books on a range of religious topics) suggests that it was a sense of the ineffable ignited the spark of inquiry and creativity that led to our humanity – that a belief in the divine, or at least an apprehension of ‘something greater’ is what made us human in the first place, the ape that first looked at a lightning strike with curiosity instead of fear. The divine was probably our first effort at ascribing causality to things we could not figure out ourselves.

So why did, why do we continue to believe, even as our knowledge and understanding grew? I think there are several reasons.

In short, we invented God to explain the big questions of life, and continue to use God as a kind of touchstone or guide for civilisation. While it’s no longer necessary, I believe there is a role for God and religion as a kind of allegory, for morality, decency, and kindness, rather as Little Red Riding Hood is an allegory for Stranger Danger and the importance of not wandering off the main path. We could just be nice to each other because it’s the right thing to do, but a story does help it stick in your mind.

Tell it to me straight and honestly. Give me a hard time if the answer really is that it’s very common. I wonder, if anyone is in the position to compare, if they are more or less common than friendships between black and white people in the USA.

Very common, and always have been.

Most of us outside the big-city ghettos mixed together, befriending or at least respecting each other – while not necessarily giving up our core religious belief that the other side was going to hell. But it is (and was) no more polite to bring that up in conversation than it would be to speculate on each others’ bowel movements. 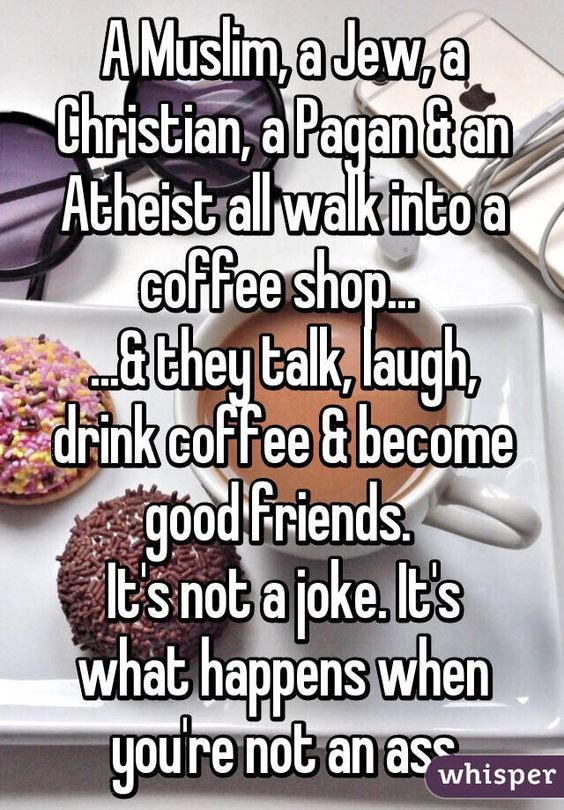 This happened to me, although technically the Muslim was also the Christian (daughter of a Hindu and a Muslim who sent her to Catholic school).

The absolute core of all religions, when you take away all the mythology and ritual and othering, is that people should try to get along together. Same in atheism, although they come at it from the opposite direction.

Most religions are about creating and preserving community. Too many religious people ignore this, and instead use tiny, insignificant details of their religion to justify doing everything they can to destroy community.

Let’s just assume for the sake of it that it’s JHWH, the great I AM.

I think that about covers it.

Eg some people believe the Christian god is true while other believe the Hindu gods are true? If faith requires evidence then why call it faith ? Surely this extra bit (faith) has no purpose then?

Simply put, religion is social engineering. Its function is to show us how to get along together, and how to deal with the bad stuff. Unfortunately, that’s a bit boring. We all know that we should be nice to each other, and we know we should have rules to deal with the not-nice people and things. Apes, lions, dolphins, and other animals have highly-ritualised behaviours that do the same things. The difference is, humans have some spare cognitive capacity over and above ritual, and quite often, that spare capacity gets used for being mean and doing bad things. If we tried to rely on those simple ritualised principles to survive, we’d have died out millennia ago, because we’d muck about and subvert them.

So, some very smart people – not necessarily the famous prophets – at various times and in various places codified those basic principles as religions. The difference was, religions usually had a god or a pantheon who demanded you follow these principles on pain of roasting for eternity, being cast into the beyond, or reincarnating as a dung beetle. They also handed out rewards for good behaviour, mostly after you died. Amazingly, despite – or maybe because of – our arrogance and superiority, we were okay with there being an even more powerful entity than us. Even more amazingly, we’d do things for the approval of these entities that we’d never do for our leaders or loved ones.

And that’s faith. Not the rules, but the belief in the rules.

Ultimately, simple rules are seen as too simplistic. Sure, you can be nice to everyone, BUT what if you’ve only got a single coin for alms, but two people in need ask for your coin. Who do you choose to give the coin to? How do you decide whose need is greater, person A, person B – or you, since you’ve only got this one coin? Suddenly the principle isn’t enough, and you have to introduce codicils and judgements. And the more complicated and vague the rules got, the more we clung to them.